Parkour is taking over Singapore's streets, one backflip at a time — and you can learn it.

Last week, Going Places Singapore looked at futsal and how playing under the Thomson flyer is creating more interesting play options within compact Singapore. In this second part, we try leaping over railings, stairs and buildings.

It’s 5.30pm on a quiet, cool Sunday. There’s nothing unusual happening at the big steps of the Singapore Management University. Except, perhaps, that half a dozen young men are crawling up them like Spiderman. Backwards.

Half an hour earlier, a photographer and I waited in the shade, anxious for the group of parkour teachers and students to turn up. We catch two young men, a European and a local in a hoodie, chatting by a pillar next to a wall.

“You think that’s them?” asks the photographer, setting up his DSLR.

Before I can answer, the guy in the hoodie leaps against the pillar, kicks off it and uses the momentum to step up easily onto the eight-foot wall. The younger European looks up as if to say eh, not bad, I guess.

Playground Singapore By now, many of you will know what this urban sport is – you will have seen Daniel Craig parkour-ing through chase scenes in Casino Royale, or done it yourself in (the videogame worlds) of Assassin’s Creed and Prince of Persia. The movement can perhaps best be described as an urban mix of rock-climbing, running and gymnastics, where obstacles are fluidly overcome in moves ranging from simple to jaw-dropping. Popularised by Frenchman David Belle in the 1980s, it has steadily grown into a world phenomenon.

Browse through videos on YouTube and you’ll see people leaping through playgrounds, green spaces, streets and car parks. Talking to Tan Chi Ying, you get the sense that the world is a parkour practitioner’s playground. He’s the guy who Jackie Chan-ed his way up the pillar before, in a move I later learn is called the tic tac.

The 27-year-old is founder of A2 Movements, a Singaporean parkour and free running agency that teaches the art. In his measured, quiet voice, he shares that “In parkour there is a philosophy: it’s not just about physical movement, but the mental aspect. The way we see the world is transformed. We see everyday things as opportunities. We see beyond challenges.”

In the context of how we can make best use of our compact space, this left-field sport is an example of turning our urban spaces into opportunities. So when Chi Ying and his class vault over rails and roll over stairs, they’re creating new play options within the same spaces.

Though it’s hard to think in such academic terms when Nick, one of today’s instructors, vaults a rail with the fluidity of a ballerina. Not that he looks like a ballerina – in long hair, sweatpants, and a singlet that shows off his tribal tattoo, he seems more like a yoga teacher who moonlights in a rock band. I suddenly feel very uncool and less than athletic.

Jump right in Still, parkour is for everyone, Chi Ying explains. “It’s a real fit for our urban jungle, with one structure linking the other seamlessly. Parkour will allow Singaporeans to train wherever and whenever they are free, making it a good fit for the fast-paced lifestyle of our society.”

The sport is pretty fast-paced itself. The class of six (including instructors) starts off with the aforementioned Spiderman crawls (great for developing core strength, says Nick), 20 pushups with a shout for each rep done, 20 crunches, and ‘the plank’, an isometric move like a frozen pushup, for well over a minute. That’s just the warm-up, and already I’m sweating just watching them. Yet, in a show of just how inclusive this community is, and how keen they are for participation, Chi Ying and the others constantly suggest the photographer and I join in.

Luckily for everyone involved, I decline, not wanting to mar their class by tripping down eight steps before collapsing in a pile of twitching limbs.

Instead, I watch Nick take two first-time students under his wing. One guy is a seasoned wushu martial artist, the other is into athletics. Perhaps that’s why they progress so quickly.

Nick teaches them three basic vaults: two-handed, lazy vault, and step vault. The two-hander uses an under-over grip, one hand to support, the other which lets go as soon as you are over the rail. As he demonstrates, you realise it’s one of those moves that looks almost laughably simple when a pro does it. Only when an amateur tries do you see how much fluidity and confidence goes into it.

Then he teaches the lazy vault (“so named because it takes little energy,” he explains). It looks almost like rolling out of bed whilst jumping over your sleeping partner. Next is the step vault, which requires some inner thigh strength as you stretch one leg over the rail and swoosh your other leg through. “Don’t rush,” he says when the newbies falter. “You need control.” Within ten minutes, however, they have a basic grip of all the moves. “I’ve taught you three vaults, now we will cover ‘flow’, which is the ability to connect the moves.”

He shows one possible flow of two vaults over two rails. “Now you try. The goal is not how fast you can do it, but how smooth you can do it.” His moves are very smooth indeed – but so, surprisingly, are the new guys’. Before, they were pinging the rails with nearly every move. Now, they swish over silently, like show horses in sweatpants.

“So that’s the first lesson,” says Nick. “Three simple vaults you can use in everyday life, from running for the bus to catching a taxi.”

Move it, baby Also in the class is Anton Baby, a softly spoken Indian national-turned-Singaporean citizen and financial analyst for Kellogg’s. His real passion, however, is parkour. That much is clear from observing how much effort he puts into his leaps, and how closely he observes his fellow students. Much of the skill, he tells me, comes down to your mentality.

“It’s like Robert Downey Jr. in the Sherlock Holmes movies, when he’s boxing. He thinks about what he wants to do, looking at the end objective and working his way backwards. I try to do the same. But of course my problem is, I can visualise it, but I can’t execute it. It’s a capability thing,” he sighs.

There might be a touch of modesty there. At least it seems that way when, a couple of minutes later, Anton leaps on top of a railing and balances on it for several moments, just casually, like whatever, man. While learning moves like this has earned him a few bruises, Anton explains the great thing about parkour is that it teaches you how to move, as well as how not to injure yourself. “With this, you know how the body works, you’re in control of every part,” he beams, adding that he doesn’t take escalators in the MRT station anymore – he jumps the stairs.

The snag, Anton says, is that parkour is an eye-catching activity. This is both its attraction and its drawback. “The thing is in Singapore, I’ll be frank – it’s a very rigid society. They don’t necessarily understand what we’re doing. People will come over and say hey, what are you doing? Natural concerns, but it interferes with what we’re learning.”

Running start A2 Movements hosts several classes a week in a variety of locations, from SMU and *Scape, to ad hoc spaces, attracting a variety of students. Teenagers, middle-aged men, women and kids all attend. It seems the sport is gaining traction here. So how would gung-ho students like Anton want to see it developed? “Probably other spaces dedicated to the sport. A safe environment for people to train. If more companies and spaces support it, we can grow.”

Drawing more members into the parkour community certainly won’t be a problem, if the participants’ enthusiasm is anything to go by. A few days after hanging out with the class, I get an email:

“Do take some time to join us for training. The skills attained are really useful in daily life, and provide a good workout anytime. Stay Frosty, Chi Ying.”

If you feel like getting your flow on, visit http://www.a2movements.com/ for classes and schedules. 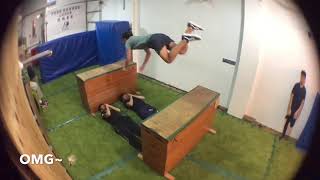 No time to train? Not in the country? No more excuses! 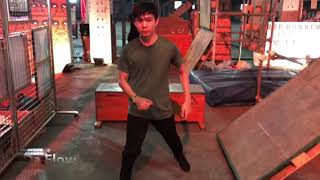 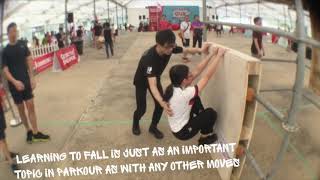 GetActive! Singapore With A2 Pakour Movements

Now You Can Blog from Everywhere!